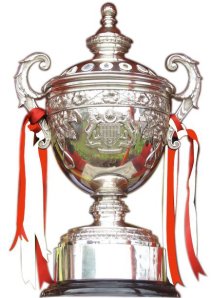 Congratulations Kelantan FA for their victory in the Piala Malaysia final. Kelantan scored 3 goals against ATM FA which scored 2 goals. Though ATM FA played very well throughout the season and shocked Singapore during their semifinal match, they failed to claim the trophy which would have been their first Piala Malaysia trophy. The last time Kelantan FA won the Malaysia Cup was in 2010.

The first goal was scored during the 44th minute by Kelantan FA forward, Norshahrul Idlan Talaha. On the 49th minute, just as the second half was heating up, Rezal Zambery Yahya of ATM FA scored a goal which came from 25-meters to equalise the game to 1-1 during a free-kick. The ATM FA fans were excited and thrilled with Rezal’s goal but was downed by a goal at the 50th minute again by Norshahrul Idlan Talaha of Kelantan. Then, a goal by ATM FA’s Marlon Alex James equalised the game to 2-2 during the 62nd minute.

Since the match was still in a tie, extra-time were needed to conclude the winner for the cup. Just at the 96th minute, Indra Putra Mahyuddin scored a goal for Kelantan FA. The ATM FA’s fans waited for a goal from the ATM FA players. They waited and waited for the two goals needed to win the match. The whistle blew at the 124th minute and the game was over. Kelantan FA won the cup.

(My exams are taking a toll on me hence I cannot read as much as I would love to... T_T)