While everyone were having lunch and praying Zuhr, the bomb squad made a security check around the hall and most importantly, the stage to make sure that there are no bombs because the Deputy Prime Minister was coming.

At around 3:30pm, the Deputy Prime Minister, YAB Tan Sri Muhyiddin Yassin arrived. The scene was like what I usually see in the news. Cameras clicked, flashes from cameras flickered. The only difference was that I was there, watching the whole scene with my own eyes. I snapped photographs after photographs but most of them were blurry as my phone can’t capture moving objects. 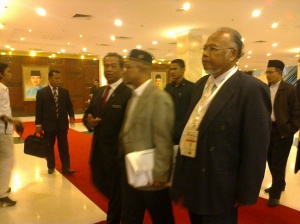