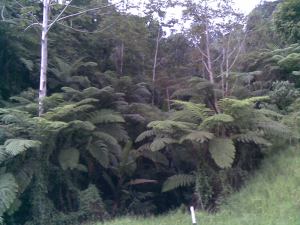 were also limestone caves. When we were already on the mountain, my father (with the idea of Uncle Oman) slide the windows open, switched off the air-conditioner and we felt the cool air coming in. We also saved energy by doing it so. My sister and little brother was sleeping at that time.

We reached the hotel at 6 o’clock in the evening. First, my father and Uncle Osman check in. We went to room 214 as Uncle Osman and his family headed to room 225. We got a room with a mini dining room together with a mini living room and three bedrooms with a toilet. Me, my sister and Anisah slept together in a room while my little brother and my parents slept in another room. We first of all went to have dinner at Marrybrown. On the way back to the hotel, we stop at a night market. My mother went there and bought some fried bananas and some keropok lekors to eat. We went out to look for stars as there was no city light and it will be wonderful as at my house there are too many city lights and it cause  a light pollution. So, we zipped up our sweaters, put on our socks, put our shoes on, rushed outside and look up at the sky. There were billions of stars, I can’t count! How glad I was.

On the next day at dawn, the temperature had lowered down to 17*C. We woke up for Fajr prayers and went out to

the balcony to look at the sunrise. But well, we wanted a better look. So out my sister, Anisah and I went with our sweaters on and ponder at the wonderful sunrise. As the sun had rised, we went to the playground nearby and had fun. It was not like any ordinary playground. It only got railings and ladder to go all around the playground. There’s also a tire swing and a strange slippery slide. We then went to the cafe house to have breakfast. We took a balcony seat as we enjoyed the view of the mountains, the nature and the natural, cool air. I enjoyed my breakfast very much.

Later, we went back to our room and started to pack our things. After we finished packing up, my father went to sign out with Uncle Osman, my little brother, and Uncle Osman’s family by car. While my mother, my sisters and I walk to the car through a beautiful garden. There were gigantic hibiscus, orchids and lots more. As we were approaching the car, Sister Arwa said that she wants to go to the garden to. So, we went again into the garden looking at the flowers.

After that, we went to a strawberry farm. We didn’t went there to

pick the strawberries as we had to pay RM20 per person so we just had a look at the mini shop which looks more like a garden. There were all kinds of cactus, colourful sunflowers, gigantic hibiscus and lots more colourful flowers. I can’t remember some of the flowers and the rest I don’t know what type it is. Later, we went to a market selling all kinds of things, from vegetables to fruits, from caps to bags. We bought some roasted corns and sweet potatoes to eat. We also bought 7 strawberry juice ice-cream for me, my sister, my little sister, my little brother, my mother, Aunty Yemen and Sister Arwa. We all love it. We also stop by a  stall  and bought  a few packets of dried hibiscus and a bottle of concentrated strawberry juice which can also be used as jam. Then we went to a tea shop named Cameron Valley Tea Shop. We bought a few boxes of sachets of tea powders. Then, my father drove us off to Penang. “Goodbye Cameron Highland!” I said. “Hope I could come here again!”